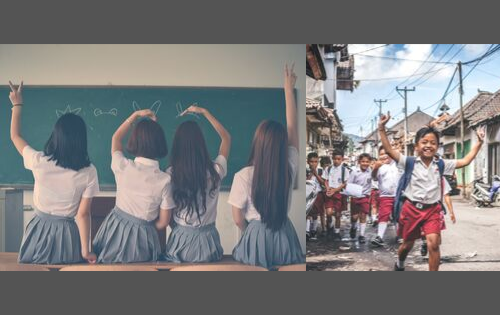 I never liked the idea of kids having to wear uniforms to school. My dislike goes back to a time when we were required to wear dresses. Our choices of dresses were somewhat limited because stores only sold miniskirts. So we were stuck with short dresses and skirts (the style).

As soon as we could wear pants, my eleventh and last year, I did. To me, uniforms were nothing more than an extension of having to wear dresses. I specifically remember my boyfriend telling me that he saw my underwear when I bent over in the cafeteria line – after I graduated. I was not pleased. And I was not pleased that he never informed me about it when I could do something about it.

My head also contained visions of communist schools requiring uniforms and Catholic school girls with bad reputations in my day, despite their uniforms. My thoughts were, “It’s my right to wear whatever I want to wear. Being forced to wear a dress did not make me happy.” And I thought uniforms would be even worse. I rebelled as soon as I could make my own choices.

My children went to the same school I had. Only in their school days, there seemed to be a competition between some students about who had the best (you name it). Even though I worked full time to pay tuition that a lot of people didn’t pay because they sent their children to public schools, we still had trouble keeping our kids in decent clothes – and other “stuff” that “everybody else had”. Our kids learned at a young age what, “No, you can’t have it”, means.

Some People Had the Best (of everything it seemed)

I have to say that we had a lot of “stuff” when I was growing up. But I learned early that it’s not really the stuff that makes you happy. I had more than I ever wanted or needed. My kids never really had a lot of stuff, so their view was definitely different than mine.

Changed My Mind – Yes to Uniforms

I relayed the name brand incident to my Mother. She said, “That’s why they wear uniforms now. Everybody is wearing the same thing, so that competition is not there. They can concentrate on studying”. Ding, ding, ding. Now it made so much sense. Uniforms had to be so much better for everybody.

There seemed, at one time anyway, to be a competition at private schools that I don’t remember or was just oblivious to in my school days. I transferred one of my own children to a public school partially because of it. I don’t think he realized how much better off he was than so many other people until he saw the difference for himself.

Stephanie is the owner of Honor Sphere. She blogs about what's on her mind. Join the conversation by checking out Honor Sphere's Facebook page.