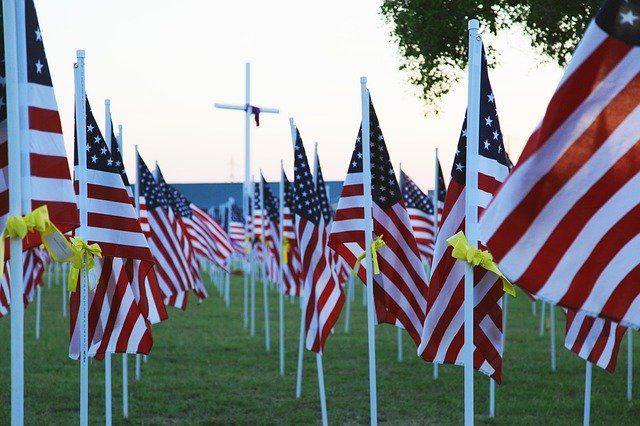 Every Veterans Day I think of my baby.

“Mom,” was the first thing I heard when I picked up the phone.

“I need to know your whole name and your birthday.”

“I need Dad’s whole name and birthday too.”

“I’m signing up for the Army National Guard.”

My mind went numb. There was a huge lump in my throat; heaviness in the pit of my stomach. I had raised him from a tiny baby. He was still a youngster in my mind.

But he was a grown man and I had no right to tell him what he could and couldn’t do. I gave him the information he needed … knowing full well this was going to impact the rest of his life.

What I didn’t know was how much it would impact my life as well.

He had to learn what it meant to support himself. Food, clothing, and shelter are needed to survive. A waiter’s salary was cutting it close. (He did finally graduate from restaurant hell, but he had to go back again.)

The National Guard didn’t supply a full-time job, but it did mean a long-term obligation. He had to be there once a month and for that, he got paid. The rest of the time he was on his own and on notice.

His military obligation was an obligation that a lot of employers were not willing to take on. “You can die for me, but I don’t have to hire you,” were the thoughts that rang through this mother’s head.

Die for me! I didn’t want him to die for me! I would die for him! But I was so so proud of him!

No Such Thing as a Weekend Warrior

Don’t get me started! With the Iraq and Afghanistan wars, there was no such thing as a “weekend warrior”. The National Guard made up a large part of the deployed force.

My son was in several National Guard units and they all deployed at one time or another. Just don’t say my son was a weekend warrior. He was “on-call” full time by the military and got paid for being part-time.

“in Iraq ‘about 20 percent of the U.S. military deaths in that conflict’ [8] have been carried by reserve and Guard units.” We knew this. I speculated. Not would it happen, but where would he be deployment, Iraq or Afghanistan.

The possibilities were always unknown. I tried not to think about it. I tried to convince myself it would never happen. But there was going to be a deployment. Where or when, who knew? Not us!

The Hardest of Times

Almost six years and three, or was it four, National Guard units later he signed a sheet of paper. By signing this paper, he agreed to extend his time of service so he could deploy overseas. He got the special training he had been waiting for.

My husband and I got our passports.

Our son gave us his will and we stored all his belongings. And he deployed.

And thank the Lord, he returned.

And he was through. No more wondering what the next day was going to bring. No more waiting to put his life on the line.

Yes, my son is a Veteran. I think of him every day, but especially on Veterans Day. He served here at home helping communities in need. He served at overseas military installations. He served at military bases in the United States. He served in a war.

I am proud of my son, a Veteran!

What is a Veteran?

at one point in his (or her) life,

wrote a blank check made payable to

“The United States of America,”

for an amount of

“up to, and including his life.”

And there are way too many people

in this country today,

who no longer understand that fact.

Stephanie is the owner of Honor Sphere. She blogs about what's on her mind. Join the conversation by checking out Honor Sphere's Facebook page.