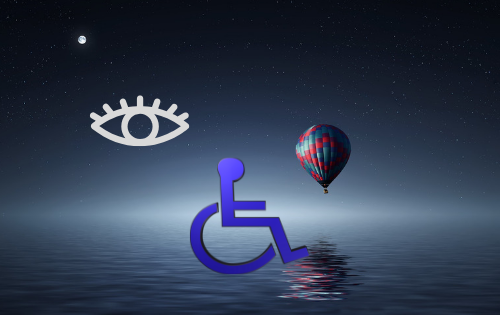 I truly respect all people and expect to get that same respect in return. When I get a whiff of disrespect, my respect for such a person begins to wane. Nothing in the section is meant to be disrespectful.

“Disability” is a legal term. Do people really have “disabilities?” “Disabilities” is a term that implies (to me) that someone is less than other people, maybe even inhuman. I disagree! The government throwing money at “disabilities” does not guaranty good treatment of the “disabled.” It does guarantee that someone will make money off of a person’s “disability.” That’s OK if the person with the “disability” gets some benefit. This is not always the case.

At one time, a disability meant institutionalization. The Civil Rights of Institutionalized Persons Act did not become a federal law until 1980. “Such institutions include state and locally operated jails and prisons, juvenile correctional facilities, public nursing homes, mental health facilities and institutions for individuals with intellectual disabilities.”

The Americans with Disabilities Act (ADA) did not become law until 1990. The people I knew had obvious difficulties long before either of these laws existed.

Disabled people can be different than the average person. But isn’t everybody different than everybody else? Wouldn’t it be awful if everybody was just alike? Sometimes I inquire about a diagnosis, but not for the purpose of looking down my nose at someone. Let me give you examples of some of the different people I have known.

Sandy was blind. He did not become blind until he was in high school. And he refused to let his blindness limit him.

Is blindness a “disability” when every other sense compensates by being better than the average person’s senses. He could hear you close to him by recognizing your footsteps.

He learned to use the label of “disabled” to his advantage. But I never considered him “less than” anyone. He learned to adapt to his situations.

He passed away when the tumors that took his sight also took his life. Never had the words of “Amazing Grace” meant so much to me as at his funeral – “I was blind, but now I see.”

“I had suddenly been demoted from the role of a professional to that of the parent as patient; the assumption by some professionals that parents of a retarded child are emotionally maladjusted and are prime candidates for counseling, psychotherapy, or tranquilizers.

My attempts to point out the many indications of developmental delays and neurological disturbances were categorically dismissed as manifestations of my emotional problems. I was witnessing another captivating professional reaction: the ‘deaf ear syndrome’; the attitude on the part of some professionals that parents are complete ignoramuses so that any conclusion they reach regarding their own child is categorically ignored.

Later I found that suggestions I would make regarding my own child would be totally dismissed by some professionals, while the same suggestions made by a professional about other children would be cherished by my colleagues as professional pearls of wisdo.

Very Little Instruction Before 1975 (a quote)

“Prior to 1975, people with profound disabilities seldom received any type of instruction. Persons with mild mental retardation were categorized as “educable” and had the opportunity to learn basic academic subjects and develop social skills. People with more severe disabilities were categorized as “trainable” and received instruction in self-help skills and socialization.” 2

Phyllis had Down syndrome. She was such a delight! I can hear her now correcting me for something – “Wash it, Steffy.” She could be hard to understand at times, but she could always make me see the beauty of the simple things in life.

She was a regular at the special Olympics. And was always proud to show off her achievements.

I only saw her upset once. It seemed that someone at work mistreated her or looked down on her.

Phyllis passed away in her fifties, but doctors did not expect her to live that long.

I am proud to say that both of these people were my first cousins. Both of their families took wonderful care of them. I cannot imagine what their parents or siblings went through in the process of taking care of them. Bless them all.

In loving memory of Sandy and Phyllis.