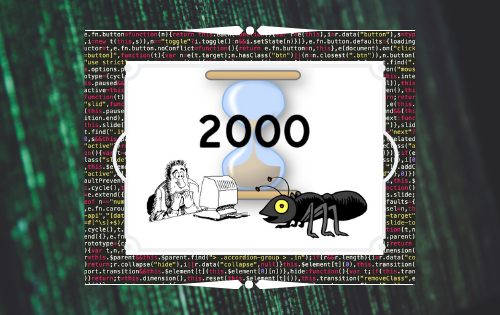 It has now been over 19 years since Y2K. A lot of people have forgotten about or never knew about the Y2K problem with computers. There was basically mass hysteria about what was going to happen on January 1, 2000.

Y2K is an acronym that stands for Year((Y) Two(2) Thousand(K). People believed that computers would stop working or go berserk. Some even thought the world would end when the clock turned over on 1-1-2000. There was a lot of hysteria and a lot of jobs for computer programmers. Then 9-11-2001 happened and most people forgot about Y2K.

The Logo Created by The President’s Council on the Year 2000 Conversion, for use on the now defunct Y2K.gov.

Was it a glitch? “A minor malfunction, mishap, or technical problem; a snag: a computer glitch; a navigational glitch; a glitch in the negotiations. 2. A false or spurious electronic signal caused by a brief, unwanted surge of electric power.”1 No, because a glitch is a “minor malfunction.” This was not minor.

Was it a computer virus?  “a segment of self-replicating code planted illegally in a computer program, often to damage or shut down a system or network.”2 C coding caused the Y2K problem. But illegal activities or even malicious activities did not cause the computer problem.

Seems like, Y2K could mean two things, but the second meaning was sort of scary. “1. Of or relating to the year 20002. 2. Of or relating to defect in the code of a computer program caused when a year is represented by its last two digits only and the program interprets that year as falling inclusively between 1900 and 1999 instead of between 2000 and 2099: Y2K compliance; Y2K testing.”3

So, What Did This Really Mean?

There was a defect in a lot of computer code. First, companies didn’t buy new computers every year or even every several years. At the time, businesses owned equipment and they viewed a computer as just another piece of equipment. Businesses often used their equipment until the equipment wore out and computers could be very expensive to get or to replace. A lot of the computers still had fine mechanical parts did not need to be replaced. At least, the mechanical parts did not need to be replaced.

The Y2K Problem Was Absolutely Complex. An Explanation.

The Y2K problem originated as a software bug – “ A software bug is an error, flaw, failure or fault in a computer program or system that causes it to produce an incorrect or unexpected result, or to behave in unintended ways.”4

First, the software bug was noticed in 1958, but most people didn’t pay attention to the problem. By the mid to late 1990s, there was a frenzy to get the bug fixed.

Eight bits equaled a byte. A byte represented a letter of the alphabet or a single number. In more understandable terms, the equivalent of one letter or one number in core memory would cost $8.00. So, programmers used whatever means necessary to conserve core memory.

Unless something was done when the year 2000 happened, a lot of computers would operate like it was 1900. No one knew what would happen, but the general consensus was that the result would be a mess. Steps to correct the problem did not really begin in earnest until the late 1990s. Talk about waiting until the last minute. People went to sleep on December 31, 1999, not knowing what the next day would bring. Nothing significant happened. Measures had been taken to prevent a major problem.

The next year 9-11 happenened and everybody forgot about Y2K.