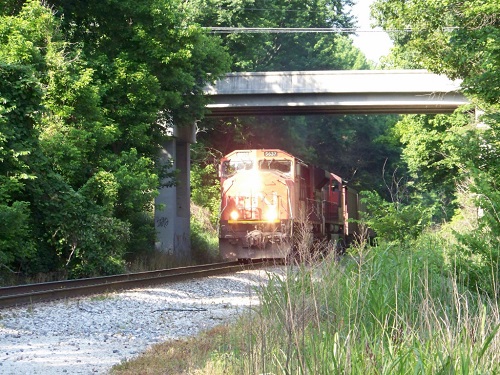 A Terrible Accident the Year I Was Born

One time, Dad cleaned the gin saws when the saws pulled his hand into the seed cleaners. Afterward, someone grabbed his hand and hid it behind him, so he wouldn’t know how bad it was. He went to a hospital where the doctors rebuilt his hand. The doctors used pins and skin, from another area of his body, to rebuild his hand. Consequently, he could not move his fingers, but it looked like a hand. As kids, we never wanted the claw (his reconstructed hand) to grab us. It usually hurt. I’m not sure he realized how strong his hand was. Even after that, Dad remained a cotton man. He ginned cotton in Atoka, Tennessee and he ginned cotton in Munford, Tennessee.

Another Terrible Accident on the Railroad

of all, someone, usually Mom, told me these stories. I don’t remember them actually happening.

Dad was working at the gin in Atoka. Because she wished to visit another lady on the other side of the train tracks, a woman crossed the railroad tracks at the road next to the cotton gin. Later, she decided to come back across the tracks. She waited for a train to pass. As she crossed the tracks, a train from the other direction hit her. She never knew the train was coming. As a result, Dad helped find the body parts after the accident. Years later, the railroad reduced the two tracks to one.

Many stories involve a death caused by a train. From childhood, I started to develop a respect for trains and the railroad track. I don’t remember having such this respect in my youth. I don’t think that people who don’t live around the train tracks have such respect. I still respect, almost fear, the train tracks.

Although he fell on some bad times, Dad had a kindhearted soul. But I don’t think he scared easily either. Dad never had a fear of talking to someone else, no matter the importance of the other person.

When my husband ran the store in Atoka, he became a volunteer fireman and an alderman.

As an alderman, he tried to cut down a tree that crossed the road. First, he got a call that the tree had fallen in the road. Cars had already been running into the tree. The sun was just beginning to come up – he got on top of the tree with his chainsaw. Seems like, he started the chainsaw and a car ran into the tree. Then my husband and the chainsaw flew off of the tree. I remember my mother calling and telling me to sit down. My Uncle, the Mayor, had taken him to the hospital. My husband broke his arm, between his elbow and his shoulder. To this day, a knot remains in the location of the break.

My husband enjoyed being a volunteer fireman. He had a radio tuned to the emergency channel all the time. I couldn’t stand it. I jumped every time the radio went off. Every time he answered a call to an emergency, I hoped he would return. I think he told me about every emergency, but I blocked many of the stories from my mind.

My husband’s worse memory is of being robbed at the store. Two people entered the store with long coats. Then when they had finished walking through the store, one came to the front and pulled out a sawed-off shotgun. He told my husband to go to the back of the store and lay face down. Ultimately when the robbery ended and the robbers left, I got a call from my husband. No one ever caught the robbers.

I’m sure that I tried to forget the incident. It was such a joy to still have my husband. However, I’m also sure that he never forgot.

I had brought my husband to this small city. He worked for my Dad faithfully for many years, until he left the store. No reason kept him here or made him stay, but he always came back and he always did what he thought was right. Furthermore, the same company that employs him now has employed him since he left Atoka to search for a job in Memphis.

What Happens When You are Destined to Raise Men?

Destiny decided that my husband and I would raise two men. Always our children, but they both grew beyond our wildest imagination. One graduated from college with high honors. He pursued jobs in his field of knowledge. The other completed special training and went to Iraq to perform his duty to his country. He completed his tour of duty and now works for a large company in the United States.

What is Aiming High for a Man?

I keep the following poem on the wall at home:

If you can keep your head when all about you
⁠Are losing theirs and blaming it on you;
If you can trust yourself when all men doubt you,
⁠But make allowance for their doubting too:
If you can wait and not be tired by waiting,
⁠Or being lied about, don’t deal in lies,
Or being hated don’t give way to hating,
⁠And yet don’t look too good, nor talk too wise;


If you can dream—and not make dreams your master;
⁠If you can think—and not make thoughts your aim,
If you can meet with Triumph and Disaster
⁠And treat those two impostors just the same:
If you can bear to hear the truth you’ve spoken
⁠Twisted by knaves to make a trap for fools,
Or watch the things you gave your life to, broken,
⁠And stoop and build ’em up with worn-out tools;

If you can make one heap of all your winnings
⁠And risk it on one turn of pitch-and-toss,
And lose, and start again at your beginnings
⁠And never breathe a word about your loss:
If you can force your heart and nerve and sinew
⁠To serve your turn long after they are gone,
And so hold on when there is nothing in you
⁠Except the Will which says to them: ‘Hold on!’

If you can talk with crowds and keep your virtue,
⁠Or walk with Kings—nor lose the common touch,
If neither foes nor loving friends can hurt you,
⁠If all men count with you, but none too much:
If you can fill the unforgiving minute
⁠With sixty seconds’ worth of distance run,
Yours is the Earth and everything that’s in it,
⁠And—which is more—you’ll be a Man, my son!

Text
is available under the Creative Commons Attribution-ShareAlike License; additional terms may apply.