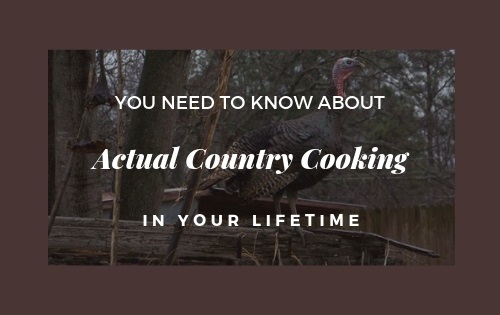 Helpful – The Simple Thing That Is the Difference Between These Two

Biscuits and cornbread are both country foods. Biscuits use flour as the main ingredient. Cornbread uses cornmeal as its main ingredient. Biscuits, especially, may have gravy poured over them. The gravy is often made from the oil of bacon. As you will notice, nothing goes to waste in country cooking.

Frog Legs Are One of the Special Treats

If you or someone you know goes frog gigging (spearing bullfrogs at night), you may be in for a special treat. You skin the legs before you put them in the skillet. If fresh, frog legs jump around in the skillet. They easy to eat and taste like chicken.

Catfish is the Fish of the South

A lot of regions have a special fish that they eat. Country people often eat catfish which has a distinctive flavor. They do not have scales, but have a smooth skin instead. Cover catfish fillets with a cornmeal mix and fry them. A typical country meal has fried catfish, hush puppies, and slaw.

Certified – Look in County Store Delies of the South

There were two basic kinds of souse -regular and BBQed. There were also round souse and square souse. The country deli also included souse, packed in a gel-like material. The country deli had a choice of two types of souse – square loosely packed and round souse, more tightly packed. I refused to cut the square on the meat cutter, so we carried only the round of the regular and BBQ sause. Souse tended to look back at me, so I never tried it.

Jackpot – The Boys Used to Make Fun of These

I never had any interest in these and never sold them, that I know of. Mountain Oysters or Rocky Moutain Oysters are the testicles of bulls, bison, pigs, and sheep. Other names for Mountain Oysters – cowboy caviar, prairie oysters, swinging beef, Montana tendergroin, dusted nuts, bollocks, or bull/pig/lamb fry.

If your boys want to gross out the young girls, they should know these terms.

I was at a Naional Guard Unit location for Tanksgiving one year. I felt sorry for one of the northern guys who had just transfered there. one of the main items of the meal was dressing. They had tons of it, but there was none on his plate or his girlgiend’s plate. All I could think was, “This must look like vomit to them.” I tried to explain that this was like stuffing, but I was doing no good. What do you call something when you combine everything in the fridge – vomit?

Then there is a favorite for every southern meal – mashed potatoes, with or without gravy. Mac & cheese is also another favorite.

Jackpot – Peanuts Can Be an Awesome Chewy Snack

Boiled peanuts, not from West Tennessee, however, I worked for a boss who loved boiled peanuts. I think he brought the recipe from Alabama. Boiled peanuts made a great chewy snack.

This Is What Happens When a Southerner Meets Wild Game

My husband does not hun. He does, however, fish. So, I think the same principles apply. They will hunt or fish to save money. But do they really save money? Hunters and/or fishermen require a lot of equipment to perform eir sports. They will go to a lot of trouble to save and process the meat. Wild game does not taste the same as a store-bought version of the same thing. Most wild animals have more muscle and require added fat in order to taste anything like store-bought.

Retail businesses are built around or fishing communities. Coolers that hold deer carcasses are available. Gun , and all the things that a hunter needs are a big deal.

This Is What Happens When a Southerner Shells Peas

Sitting around and shelling any kind of peas or beans can become a competition in the country. It’s country entertainment. And later you get to eat them. Shelling purple hull peas is special though. Everybody’s fingers get purple from the shells and it’s impossible to wash off. They are delicious though. Try topping purple hull peas with mustard and onion – mmmm so good.

So You Know, Hog Killings – A Thing Before My Time

Hog killing time was sort of a ritual in the south. Sometime between Thanksgiving and Christmas was hog killing time. Both of my parents probably witnessed hog killings but I never did. People wasted very little of the hogs they killed.

I did witness this. Pickled pigs feet were readily available in my time. Perhaps I’ve seen pickled ears saw pig tails cooking one time. Souse was an instance of everything being used. The gel was probably made from cooking the pig bones. Everything else was packed into the gel. Chitterlings were made from a hogs intestines. I often heard that if you found a kernel of corn in your chitterlings, somebody didn’t do a good enough job of cleaning them. I did try chitterlings once. They were fried not boiled. We sold pig’s brains (hog’s head cheese) in a can at Andy’s Atoka General Store. Mom said that scrambled eggs and pig’s brains were quite good. Fatback could be bought from the local butcher. It was often used to season beans when they cooked. Lard was also fat that came from pigs.

West Tennessee is famous for pork BBQ. BBQ ribs, BBQ sandwiches, BBQ baked potatoes – you name it, it can be made with BBQ. The best meat from the pig is saved for BBQ. Then there are BBQ tournaments where teams compete to see who can make the best BBQ. In Texas, BBQ may be beef, but in West Tennessee it’s pork.