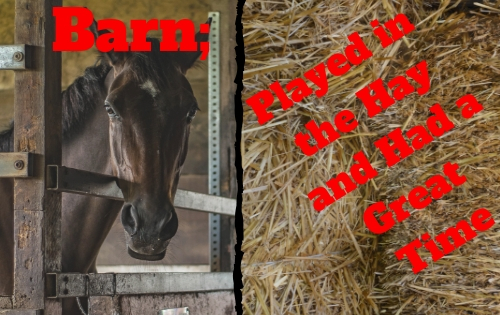 So, my lifelong masterpiece has a house. It’s filled with memories of horses, a concrete ponds, flying in plane, and grief. This is about playing in a hay barn. Many of your stories will intersect with mine and that’s wonderful. But each of you also has your own masterpiece within you. Hopefully, you’ll show us yours.

A pole barn was in the pasture where the horses were kept, next to the house that was designed by Dad. The swimming pool was not directly behind the house, but behind the house none the less. In the winter the barn was filled with hay. I’m sure the hay was for the animals, but it was also a great place for children to play.

These Unusual Events in the Barn- Unexpected

We didn’t always lay in the hay. There were lots of things to do in the barn.

Finally, it did eventually hurt, with every movement of my arm. The local doctor wrapped my arm in a splint to hold it in place. And I was off to a Memphis hospital for an operation and a long recovery. I returned to the fourth grade to take a surprise test, that I failed miserably. But that’s another story.

Later, my brother came to me asking if he broke his wrist. I had experience, so he thought I would know. I said that I didn’t think so because the bone wasn’t pooching out. He had been swinging on a rope in the barn and fell off. My bad – it was broken.

But, even with all that happened, we had a great time in that barn. A lot of friends joined us there as we played.

This has become part of my masterpiece; the special remembrances in my brain. I’m sure you have many and I hope you will tell yours.

So far I have shared these stories –

Today was about our barn. You can share your exeriences also!