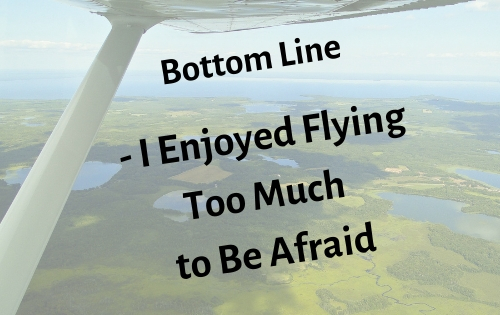 Flying may be an art unto its self. But we can still paint. This time it’s in the blue sky. Light blue with lots of white for clouds. From the ground, the plane may be only a few drops of dark paint. I like to use oils. They mix well and dry slowly.

We took two vacation trips, while I was in High School, in the Cessna. One was VFR (Visual Flight Rules) the other was IFW (Instrument Flight Rules). There are VFR Waypoints when using VFR in unfamiliar areas. Dad would say, “look for it.” I remember Amy squealing, “There it is!” I never could find those things.

Both trips were to Jackson Hole, Wyoming. In the linked article about Jackson Hole, you’ll notice that “hole” is another name for a valley. Thus we landed in the valley where the city of Jackson was located. At that time, between 1974 and 1976, only small planes landed at the Jackson Hole Airport.

Our flight to Jackson Hole included going over the mountains. I remember being relieved when we finally saw the airport. The mountain tops seemed to last forever. We stayed in Jackson and went to Yellow Stone Park which had an entrance at the other end of the valley.

Again on the VFR trip. We came up on a huge thundercloud. I coulded see a top in sight. Suddenly,out of no where, we saw a small plane in a landing pattern. Dad turned the plane to get behind it. I don’t remember this at all, but Dad was in big trouble when we landed. He hadn’t been able to find the airport on the radio. Whatever happened, he was my hero.

This could have been the same stituation only IFR:

The thing is, I don’t ever remember being scared. We had a grass landing strip beind our house. If we made it over the treetops we were good to go.

This was the Best Place for Flying In, Eating, Flying Out

We would go flying often to Tennessee’s Reelfoot Lake State Park Airpark . T gave Dad a destination to take us. The was closed the last time I went, but there are still lots of memories there. The Airpark had an Inn that over the water. We were able to walk and look into the lake as we strolled.

Andy was able to go with us to the Airpark. At that time, I think Dad kept the plane at Millington – Charles W. Baker Airport. As I remember it, a friend of ours was having trouble keeping his lunch down. Andy will surely have a different memory. Dad hit the runway at Charles Baker to land. One of his brakes was out. Andy jumped out of the plane to steer the plane along the runway. Don’t know if any lunch was lost, but we made it.

I stand corrcted. The plane was full – Mom and Dad, Andy and me, my friend and her husband. Andy noticed break fluid at the Airpark landing strip. My friend’s husband was scared of flying, especially now. Dad radioed ahead to Charles Baker Airport to be prepared for a difficult landing. When we landed, Dad jumped out to slow the plane. Andy helped push the plane to the hanger.

So far we created:

With just a few minutes a day, create your own masteriece.