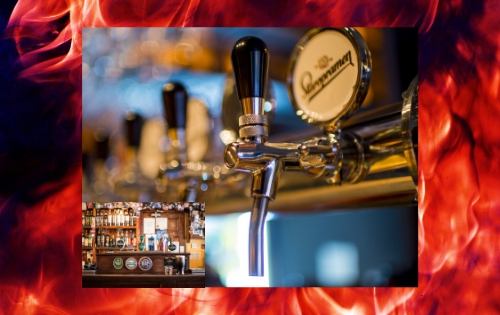 My second job ever was working at a college bar. The bar was located in Memphis, Tennessee, on Madison just before the I 40 exit and close to the Southern College of Optometry. There was nothing nice about it except the food and beer. They didn’t serve liquor. The city kept a copy of my fingerprints. Everyone drinking had to be carded unless I wanted to spend some time in jail.

My Day Involved Watching Other People Have Fun

I had finally turned 18. My friends and I lived on Prescott. The sun was setting on the horizon as I drove toward downtown for my job.

First instance was a girl objecting to being carded. She poked out her chest and said can’t you see that I am over eighteen. Personally, I didn’t care how old her boobs were.

The second time, a bunch of sports fans celebrated a win. Suddenly, fire rockets were going off everywhere. Someone attempted to get behind the bar. I picked up what looked like a baseball bat and threw it at about knee height.

When cleaning, I found a long glass beer bong and kept it as a suverir until it eventually broke.

Otherwise, no drinking and watching other people have fun became my way of life.


Finally, This Happened on a Regular Work Day

My roommates were at Overton Square.

They entered the bar where I was working…It looked like all of downtown was on fire. Did you realize what was happening?

The building across the road is on fire.

We went to the door and sure enough the building across the road was on fire.

That’s all I remember about that night. These articles should fill in some gaps: a PDF called ECONOMICS, GRIEVANCES, PROTECTIVE-EMPLOYEE UNIONIZATION, AND THE 1978 MEMPHIS FIRE AND POLICE STRIKES by Charles Steven Palmer from the University of Mississippi, The Firemen Next Time by John Berlau on October 14, 2010, on National Review, Memphis Firemen Join Police in Strike by James Cole, August 15, 1978, in the Washington Post , and Firefighters’ Strike In Memphis Brings Blazes and Curfew, July 3, 1978, New York Times.